We need to develop an understanding of the fundamental differences between Eastern and Western philosophy. One of the Grand differences is the unity of Eastern thought as opposed to the separatist approach of the West. Quantum physics has no connection to biology for instance, yet our molecular biology is made of the quantum waves that have recently been discovered by Science. Each of the sciences is separate and distinct from the others: physics, chemistry, biology, physiology, psychology, philosophy and religion are completely unrelated fields. In eastern perception, these are all studies of human existence, while the goal of education has been to develop a complete understanding of man and his relation to the universe: leading to a state called enlightenment. Seeing the complete picture of reality is the goal. The Western view is so busy examining each piece of the puzzle with specialists and microscopes that the “scientists” have not realized they are only pieces, and there Is a bigger picture.

When I was finishing high school (mid ’60s), I was taught that mind and consciousness developed or evolved out of material substances, a Western scientific view in opposition to the Eastern world view. According to Eastern teachings, consciousness exists as a universal (spiritual) reality, a pure Awareness that has intelligent awareness of its own existence. Only in the last few decades have some of the most brilliant scientists come to conclude there is some kind of field uniting everything. Einstein for instance was always searching for a unified field; his spiritual son David Bohm came much closer to finding it, while John Wheeler wrote books about it. A comprehensive reading on this subject is by Paul Levi.

In Samkhya it is known that consciousness itself is the manifester, through vibration as electromagnetic energy (the Quantum field), to become the universe in its material form. Intelligent awareness then evolves perception and senses to experience its own self-creation. We as humans are the perceivers of the universe – a divine manifestation. In Western thought, scientists are only now awakening to the fact that consciousness exists, and there are many who do not even want to talk about it.

In the ancient texts known as the Vedas, written by Indian sages thousands of years ago, this philosophical concept is explained time and time again.  There have been subsequent commentaries written about these texts down through the ages. The view expressed therein has become known as Vedantic and/or Samkhya philosophy, the underlying principle of yoga. Looking at the structure of the universe through the lens of Samkhya gives us a kind of scheme of energy flow, from its source in consciousness to its destiny in solid matter. Consciousness in this context is pure awareness of being. The universe is aware of “Being”, on a large scale, and this awareness is at the center of everything. We, as very little parts of that universe, have small pieces of that awareness, which gives us the individual perception of ourselves and the world in which we live. 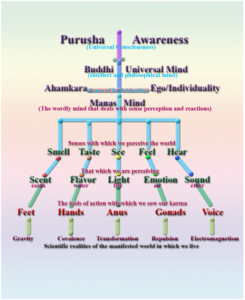 As this universal consciousness begins to vibrate it becomes a cosmic energy substance called Prakriti. In modern technology, this infinite energy field is what I refer to as the electromagnetic ocean. In more recent times it is referred to as the Quantum Field. It contains within it every aspect of the energy world, from the smallest quantum to the largest galaxy.

Mind then works through that dream to develop the senses of perception: 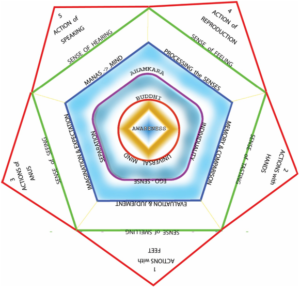 Through these senses awareness can experience life as it has been created, while the purpose of the creation is for the enjoyable experience itself.

These are all the ways in which consciousness perceives the vibrating energy field, and of course it is all interpreted through the mind.

Here is another view of this concept, but from the perspective of center to outer realms.

In order to complete visible manifestation there needs to be a way to interact with the senses of perception.  To do so, six organs of action are added:

By the time all this is done we are well out in the material world and usually out of touch with where our awareness originated. There is a type of natural barrier, called Ahamkara in Sanskrit, that keeps us preoccupied in our mind stuff and the experiences of the world so that we don’t tend to look inward to the Buddhi. This creates the sense of individual ego that makes us feel separate from the rest of manifested creation. This Ahamkara is very connected to the Manas aspect of our mind, which creates a limitation in that we cannot see beyond what the worldly senses can perceive. We cannot see beyond the walls of the room we are in, for instance, yet we know there is a world out there. The result is that we think about the obvious perceivable reality and function accordingly. The higher mind of the Buddhi brings in the imagination and memory – extending our thought process to unlimited.

If we look back at the Samkhya Philosophy we introduced at the beginning of this text we can now see more clearly and perhaps understand that this ancient system of knowledge was really quite scientifically accurate in its description of “reality”. Let us make a brief comparison of how reality is perceived in Samkhya and in Modern Science:

The differences in terminology above are referring to the same phenomena. As the languages are not the same, we do not at first glance see the similarities, but when looking more deeply into the explanations for the terms, either in Sanskrit or in nuclear physics we are drawn towards the conclusion that both schools of thought are indeed talking about the same things. These differences in language are of course based on varying sounds which have been associated with certain concepts. The fact that the concepts present in modern quantum physics are elaborated upon in Sanskrit texts that are thousands of years old makes us look again at what the ancient peoples knew.